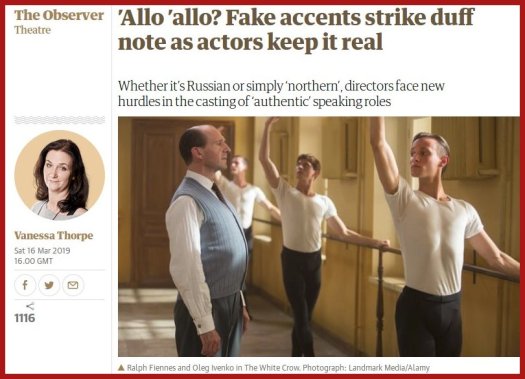 I saw a few casting directors tweeting the above article about a shift in the casting of speaking roles.  It highlights how actors are increasingly expected to be culturally aligned with the characters they play.  It has a lot to do with ‘cultural appropriation‘ – a contentious topic.

“An actor’s automatic licence to fake an accent is now increasingly in doubt.” – Vanessa Thorpe

As a South African actor, I’m aware that mainstream South African roles are almost exclusively played by non-South Africans who for the most part fail to accurately deliver the accent.  Even so, they’re working with recognised names, are handsomely rewarded and in a position to elevate their careers.

If they weren’t allowed to play those parts, would it also mean I could only ever play South Africans?  Bit of a double-edged sword that one.

As a student, I played Ivan Khlestakov in The Government Inspector by Nikolai Gogol.  For inspiration while developing the character I was advised by my director, Andrew Buckland, to watch a film that I’ll never forget: Withnail and I.  It was the first time I saw Richard E. Grant on screen and I’ve been acutely aware of this fellow Southern African ever since.

He has forged an impressive career and most recently won a slew of awards for his role in Can You Ever Forgive Me (including BAFTA and Oscar nominations).  Before jetting off to La La Land for the Oscars, Spotlight caught some of his thoughts on being an actor: